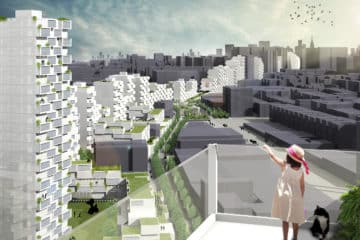 Prompted by Crain’s New York Business to address housing solutions for a New York of 9 million inhabitants, C+GA envisioned the creation of new land over existing sunken railroad lines and below-grade highways around the city. There are potentially over 100 miles of sunken areas in NYC. Our proposal re-knits neighborhoods in the Bronx where Metro North’s Park Avenue rail cut currently divides them.

Bridging this existing 7 mile stretch of rail line in the South Bronx can support up to 16,000 housing units for 50,000 residents, along with commercial, community and open space. The cost of building over the publicly-owned rail cut would be offset by eliminating the cost of land purchase; and the relatively short span over the 60-foot-wide cut makes a linear development cost-effective when compared to large deck areas required at rail yards such as Hudson Yards in Manhattan. The design proposes prefabricated construction to minimize disruption to the rail line below. The modular units would allow for height variation to blend with each neighborhood’s scale and context. Open spaces and park land are integrated to enhance the connection to the surrounding streets and neighborhoods.