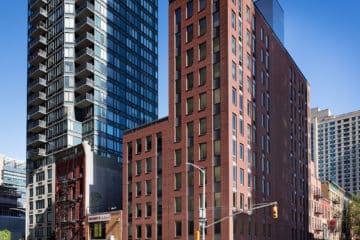 Consisting of two buildings, this eleven and six story mixed-use development on the Upper East Side provides inclusionary multifamily housing with a community facility and commercial space. A total of twenty-eight affordable units are provided across both buildings, which is situated next to the new Second Avenue subway line. The project’s materiality and scale are designed to complement the fabric and history of the neighborhood. Brick and cast stone façades with punched window openings, alternating metal panel accents and masonry patterns, along with the varied massing are a sensitive and understated response to the surrounding context. The brick fenestration along the 92nd Street façade provide a play of light and shadow that break down the scale of the building mass while being reminiscent of the historic architecture to the neighborhood. At the base of the building a cast stone and glass storefront create large openings at the pedestrian scale that enhances the street life along Second Avenue and 92nd Street.